Apparently this is a photo of a child demonstrating autistic-adjacent behaviour. She categorizes things, she puts things in in an aesthetic and logical order. This, truth be told, seems to me to be a completely natural endeavour which actually rings my happy bells. We all try to make sense of this world by whatever means available.

When I was a child I would crawl into Grandma's pantry and reorganize all the tinned food in the order that seemed to make the most sense.  What did I take away from doing that? I got a few moments of being in control of my environment. I got praise for a job well done from my Grandma. I got a sense of purpose that a six-year old rarely gets when navigating the grown-ups world.

I think that adults really need to stop to think a bit; to think about where they came from, and to think about what effect the labels they parse out has on kids. If I were to throw out an observation it would be that we adults are still trying to organize our own crayons and we really shouldn't be pushing our unresolved crap onto our next gen without taking a few moments of introspection first.

But then again I'm neither a parent nor a psychologist so I could be entirely off-base, in which case just enjoy the photo.

There's so much angst and sadness in the world. There I was, moping about my life and doing a little wallowing in the company of a stinky cigar when I learned that someone witnessed, quite accidentally, some child porn online.
She didn't seek it out, she simply stumbled upon some guy's LJ page that had some.
Everything came into perspective right then. My problems and fears shriveled immediately and my thoughts went out out to both the victims and the poor sick bastard whose lives were impacted by this reprehensible act.
There's so much hurt out there that needs tending to. I feel so sad and helpless that I can't fix any of it. And yet mine is only one tear in a torrent of tears.
Every day we strive to be decent people and every day there's something out there that pushes our limits and strength.

I remember being told that rinsing one's mouth with salt water helped get rid of the post-cigar mouth funk. I have no idea how to deal with this, though. There's not enough salt in the ocean to wash this horror away. There aren't enough flannel sheets and blankets to hide under. It just has to be one step forward at a time, forging into the ugly mess that is our existence.

It just hit me after my divorce with Facebook that I should suport Livejournal with a couple of bucks.

I remember In the Beginning of the Internet" thinking that free hosting was some kind of right.  I think that I'm over that now, having seen the actual cost of free hosting, and having also compared it with the cost of a slightly fancy lunch. So here I am, all paid up and feeling like I struck a blow in the name of freedom. I'm happy. Now if only if I could get that Identify Music thingy to work automagically instead of having to type the current song's details in the wee box.

Not much of an entry, eh? Sorry, I have to get some actual work doone. ;-) 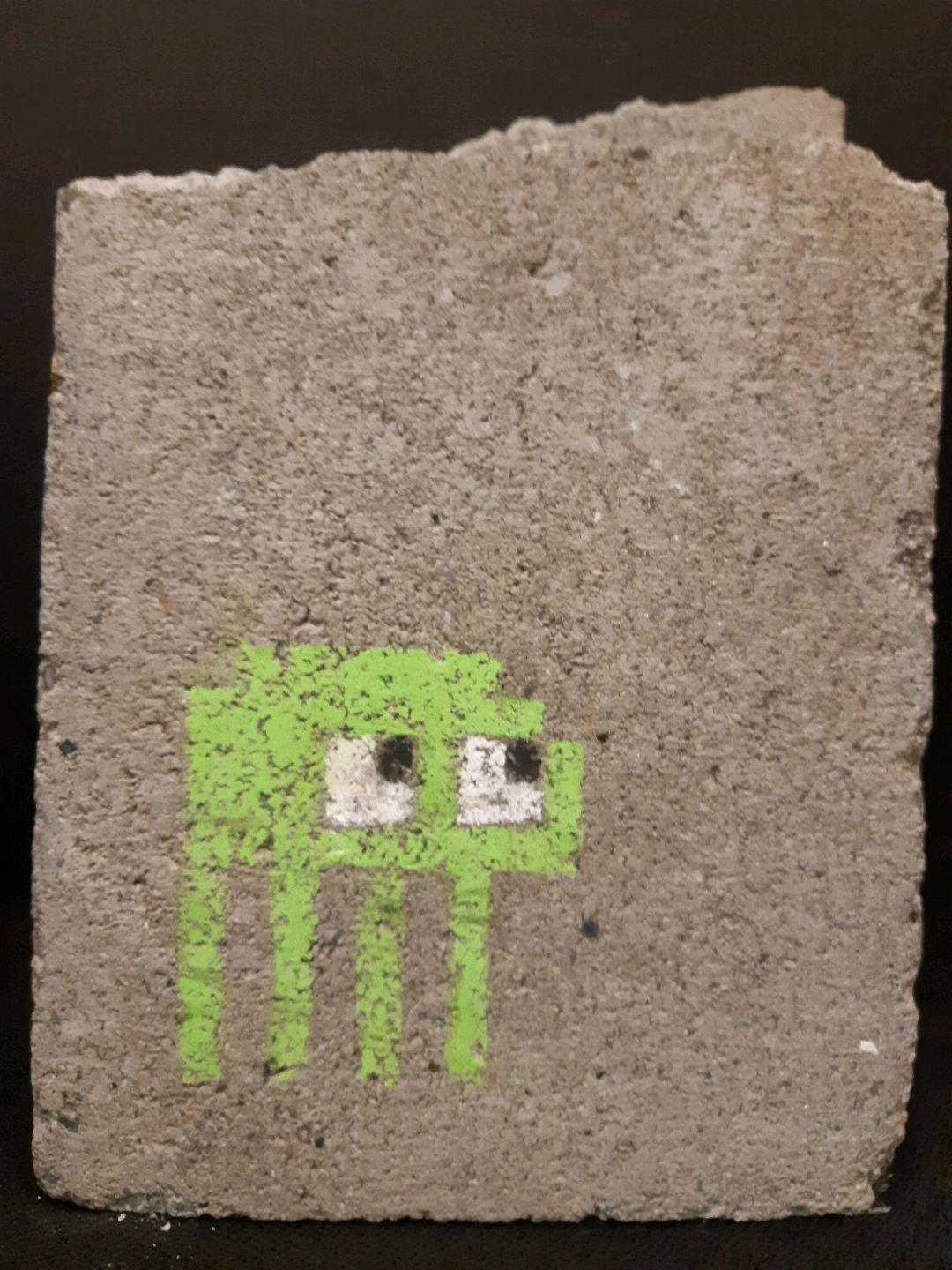 I made this one quiet afternoon at work. What can I say, we have crayons and cinder blocks just laying about the place. I found the pattern in a book on graffiti (Graffiti And Street Art, Waclawek 2012) then mapped it onto a graph. That's how I do art; accurately. Maybe I missed the point about the creative aspect of artmaking, but this little green alter-ego makes me happy just looking at him. He's also an excellent doorstop.

Yesterday's Word of the day is Pinetum.
My first guess was it referred to that slight belly extension that you get when you quaff a litre of Spruce Beer but no, its actually a:
noun: An arboretum of coniferous trees such as pines.

I have to admit that it's a better guess than my guess for today's WOD which is Arctophile. I thought for sure that this might have something to do with Loving the Arctic (because clearly I can't differentiate between Arcti and Arcto) but I was proven wrong once again. Would you believe that it's a:


Why am I telling you all this? Because I thought that an entry is better than no entry.

So my wife is leaving for Italy in a week. She's taking a University level drawing course that will last a month. We're both a bit apprehensive about the whole thing. She's got her own set of worries that she won't enjoy being stuck with a bunch of undergrads for that length of time. She's worried about performance too, of course, but given that she was an architect in a previous career I think she'll be fine with a pencil. She also keeps mentioning that she hopes that I'll be happy to see her when she gets back.  She thinks that we spent far too much time in close quarters last year because of the cancer treatments I went through and that it would be good for us to spend some time apart and that I'll stop being angry.
I'm not though; angry, that is. What I am feeling is a gradual disinterest in and dissolution of the relationship because of the complete lack of intimacy that was brought to us by menopause. No cuddles, no hugs, and certainly no love-making for the past two years kind of brings a guy down - health issues notwithstanding.

Anyway, I am kind of looking forward to the break. I keep thinking back to when I was single and young and lonely and I wonder if next month will be like that again.  Wait and see. Wait, and see.

Everyone makes mistakes
The girl slept on the subway
my gf asks me to go deeper.
Bringing down the roof
I guess it could be worse


Maybe I can create haikus from these. Not today of course, maybe later.
(Link titles from reddit.com) 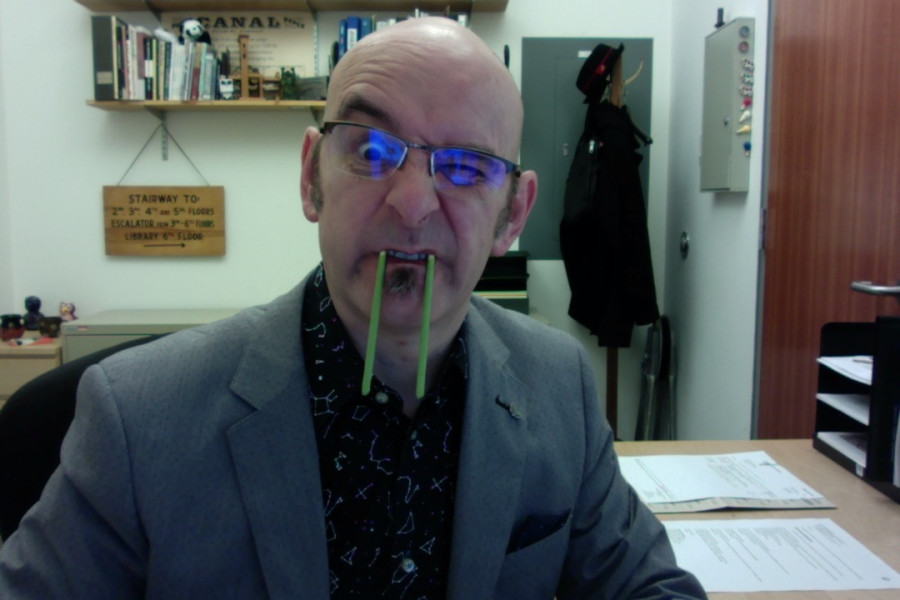 That's it. Nothing deep, insightful, or important; just a silly photo on this ice-slick of a Montreal morning. The freezing rain has left us with a beautiful, yet treacherous city. I didn't take a photo, there was no time before my hasty descent into the underground.

The commute? It was pretty good given that the schools are closed because of the freezing rain. On the Métro today I spotted one commuter rehearsing her presentation off of hand-written cue cards. Thin lips memorizing as quickly as they could as the deadline loomed large.
Another, a couple - newly-minted - shared earbuds, shy smiles, and a sense of wonder as they happily stood in each others' bubble, she holding onto his arm for balance and he occasionally reaching out to caress her face.

They live inside us, and all around. This little fellow lives at my music school.
I was going to write a long entry about how I didn't even receive a card for our anniversary but chose to just mention it instead of going full reporter on the event. It's enough to remember the sadness that came from it, and to move on from there. I need to be a better sweetie if this is the state of the relationship. Thete was water in the basement, seeping up through the slab as it does every spring. The ground is plump right now and the sump pump can't catch up.
My drums were all stored away on anything dry so I couldn't practice. But last night I set the kit up again and played a couple of grooves. It felt weird, like kissing your Ex or something. It will take a while to get the kit back in that comfortable zone but I've got time.

Leaving work for drum class yesterday I espied a folded note on a ledge in the corridor.
In the top left corner read, in a slightly flourished handwriting "To: U" The note was taped shut with a feminine looking crafting tape printed with waves of teal and purple.  At the bottom right, simply "-J" in the same delicate penmanship.

I'm a sucker for this kind of thing. There's a certain romance about the narrative of an anonymous note that speaks to the depth of me so I scooped up the note and slipped it into my jacket pocket. I didn't want to be late for class, and I didn't want whatever was written within to hang over me during my lesson. It did anyway. Of course it did. How could it not? I managed the rhythms set before me but at times I was clearly daydreaming  - losing count in a pillowy cloud of what ifs.

Walking home, my sticks safely stowed in my briefcase I slowed to find a suitable spot to open the note. St. Catherine street paid no attention to me as I put my back up against a light standard and slipped the paper from its warm pocket, deftly cutting though the tape with a ragged fingernail. The bulb directly above me cast a warm glow onto the wrinkled sheet, the words doing the same to my heart.

Today I posted a thank you on Craigslist / Missed Connections for J's wonderful and random act of kindness and I now share this sentiment with you.

I remember watching an episode of Black Mirror titled Nosedive a while back. It had to do with how a stronger rating of your online persona made it easier to have nicer things etc. etc.
I watched the episode with a sense of foreboding and amusement as I imagined this kind of scenario maybe realizing itself within the next decade or so. Clearly the world moves far faster than I think it does because in today's news the following headline:

I concede the idea must look absolutely brilliant to governments who want to keep everyone and everything in tidy order but has no one thought about the black market this will create? Will it be a quick bitcoin transfer and poof, Vladimir has added just the right amount of likes to your Social Credit score?
Maybe this won't happen, but I like to think of the dystopic society this could create - as a mental exercise, of course.